Watching Murdoch Mysteries, a Canadian television drama, is quite enjoyable. The television series set in the 1890s includes a web of conundrums and crime, but also serves as a kaleidoscope into Toronto architectural delights. The City’s landmarks, now regarded as historic, are shown as real and raw as possible in this crime and suspense drama. However, people of those times would have never thought that their beautifully designed Georgian, Victorian, and Edwardian architecture would be torn down and eliminated.

During the past years, the race to build more and more condominiums in and around the City has resulted in the near extinction of Toronto’s historic and iconic landmarks.

Bruce Bell, Toronto historian and tour guide of St Lawrence Market, is not happy about it:

This is not the first time it is happening. In the 1950s and 60s, 20,000 historic buildings in Toronto were demolished and replaced by new office buildings.

Bell, who has been in this business for the past 17 years, feels that these buildings, though dirty and old, could be saved. If they were cleaned and refurbished they would sparkle with their original charm once again. So what is the issue?

We do not have a proper heritage plan to make a concrete decision in this regard.

Shopping in the Old City Hall

Bell says that the trend continues, though focus has now shifted to building residential apartments and leisure arenas. For example “there are talks of converting the Old City Hall into a shopping mall and building condominiums beside Casa Loma.” Bell holds these plan in contempt as “these iconic landmarks have rich history and replacing them with modern motifs is doing injustice to both the entities.”

He however commends the Distillery District, a National Historic Site comprised of more than 40 heritage buildings and 10 streets for preserving the old charm of Victorian-era industrial architecture.

Though there are some condominiums in and around the Distillery District, they have blended well and do not disturb the bygone era appeal.

Camille Bégin, historical plaques program coordinator from Heritage Toronto, says that talks to convert the Old City Hall into something new had been under discussion since the construction of the new City Hall began, and under no circumstances will it be demolished:

This is because the Old City Hall is not just a building but a monument that reflects and depicts Toronto’s rich history which every Torontonian is proud of.

According to her, every condominium project is differently designed, and not all heritage sites need to be cleared or demolished to make space for new developments. Despite the tall building boom, developers are aware of Toronto’s rich heritage in buildings and architecture, and “how much they attract as well as influence the decision of prospective buyers.”

The Failure To Protect Heritage Sites

Richard Fiennes-Clinton, the owner of Muddy York Walking Tours, also feels that the City has not shown enough initiative to preserve its historic sites and landmarks as compared with other North American countries.

Apparently, there are old buildings which are eligible to be tagged as heritage sites but fail due to lack of proper upkeep, says Fiennes-Clinton. They are eventually demolished and replaced by residential condominiums.

Although, some builders have done a good job retaining the old rustic charm of the property, while still providing the residents with modern amenities.

Fiennes-Clinton says that the city authorities will eventually have to decide whether they want to keep the historic buildings, that attract many from Canada and elsewhere to this beautiful city, or just make condominiums and fill the space.

Recently the artistic duo know as Glo’erm and Tuggy have put up authentic looking development application signs at the Old City Hall, CN Tower, Casa Loma and other heritage sites (you can find them here, on a dedicated Tumblr page). Although these signs were not in fact real, the issue has sparked a serious debate about how new condo development can threaten the city’s heritage buildings and sites. Bell, Bégin and Fiennes-Clinton call this a smart campaign, which has definitely hit the nerve and opened the issue wide for discussion.

It is unknown who the real artist behind the nickname is, but he did spoke to The Globe and Mail about his recent work. This is what “Glo’erm and Tuggy” had to say about the signs:

These hyper-dense development proposals don’t reflect my values as a Torontonian. But I am not opposed to development. In the face of an affordability crisis, this city sorely needs more housing, and the densification of most existing neighbourhoods is necessary. I am opposed, however, to development that so dramatically disrespects the city.

Toronto has always been among the most liveable cities in the world and therefore the population in the city has been justifiably increasing at a fast pace. The need to have more residential units is genuine and acute. It is up to the city administrators to decide how they can preserve Toronto’s rich vibrant past. The amalgamation of modernisation with the city’s lively history will strike the right balance for Canadians and tourists alike to celebrate Toronto’s past, present and future, all at the same time.

Finally, we leave you with one more of Bruce Bell’s thought:

Toronto has an amazingly rich past, which tells the world we are full of character. Likewise, our historic sites and buildings are tangible part of culture, which should never be forgotten.

There is no better example of gentrification than the recent moving of the William Whitehead Mansion. Built in 1887, this two and a half storeys detached house has been listed on the City of Toronto Inventory of Heritage Properties since 1974. 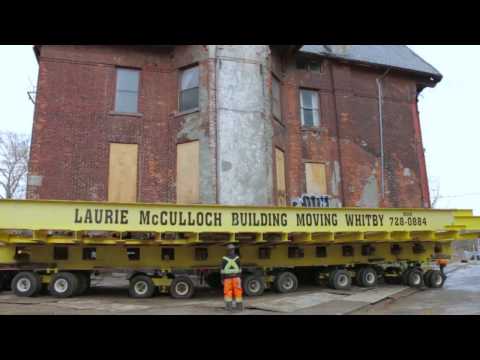 What was the reason behind the decision to move the house a mere 100 metres from 76 Howard St. to 28 Howard St.? The development of 1,000 condo units on the north of St. James Town.

The first application suggested demolition of the house, however the revised edition did take into consideration its heritage value, so they decided to move it.

The video and photos of the moving (courtesy of the Mr. Stephen Mason and his YouTube channel).